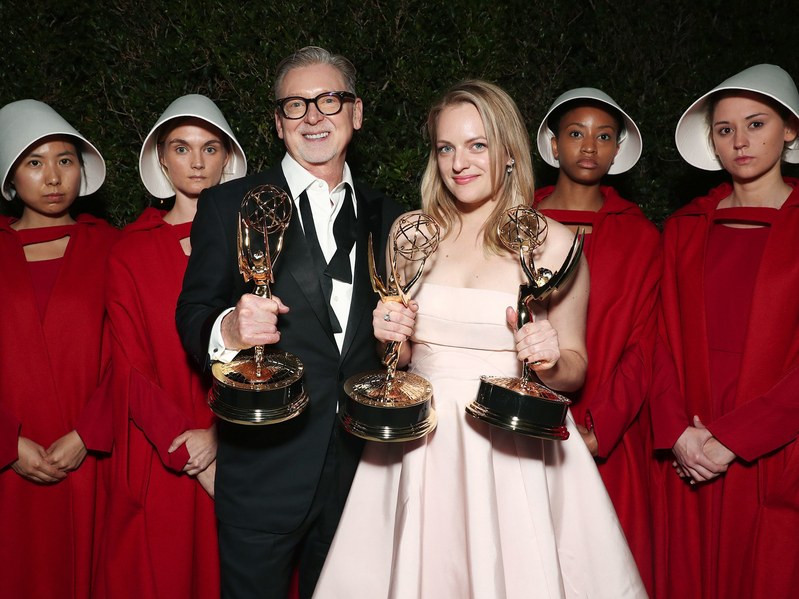 Does Hulu’s Handmaid’s Tale win herald televisions new Big Three…?” In 2016, when Jill Soloway accepted her Emmy Award for directing Transparent, she hoisted it in the air and hollered “topple the patriarchy!” At the time, she was talking about trans rights, civil rights, and the feminist movement, mostly on TV but globally, too. Twelve months later, The Handmaid’s Tale, a show where the patriarchy literally rules all and women’s only hope of survival is to topple it, won the Emmy for Outstanding Drama, becoming the first series from a streaming service to do so.

The win didn’t just cement Hulu’s position alongside Netflix and Amazon as creative class leaders…televisions new Big Three. Along with a strong overall showing by Netflix, it underscored that streaming’s Big Three now hold the same vaunted space that the major broadcast networks did for much of the 20th century. Read more at Wired.

Hulu is a leading premium streaming service that offers instant access to live and on demand channels, original series and films, and a premium library of TV and movies to millions of subscribers in the U.S. Since its launch in 2008, Hulu has consistently been at the forefront of entertainment and technology. Hulu is the only streaming service that offers both ad-supported and commercial-free current season shows from the largest U.S. broadcast networks; libraries of hit TV series and films; and acclaimed original series including Emmy Award-winning series The Handmaid’s Tale, The Mindy Project, The Path, 11.22.63, the Golden Globe® nominated comedy series Casual, as well as the upcoming Future Man, Castle Rock, Marvel’s Runaways and The Looming Tower.

In 2017, Hulu added live news, entertainment and sports from 21st Century Fox, The Walt Disney Company, NBCUniversal, CBS Corporation, The CW, Turner Networks, A+E Networks and Scripps Networks Interactive to its offering – making it the only TV service that brings together live, on-demand, originals, and library content all in one place, across living room and mobile devices. Read more at Hulu.